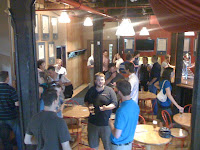 The last year has been a busy one for uxWaterloo. We’ve had some great speakers and workshops, and our meetings always feature great discussions around a range of UX topics.

For our July 19 event we decided to kick back with an evening of informal conversation and beer. We met at the Brick Brewery in their hospitality lounge, where the beers were a welcome antidote to the hot and humid weather, and the discussions as rich and varied as always.

We’ll be meeting there for August as well, and while there’s no guarantee that the weather will be as hot and beer-appropriate, there’s always the great company and chance to meet new people in Waterloo Region’s UX community.
Posted at 7:00 AM No comments: 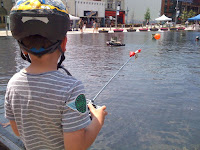 This past weekend was a busy one, with lots going on in Waterloo Region. The highlight for me was Sunday’s square2square event, during which much of King Street was closed to motor vehicles between Kitchener’s Civic Square (in front of City Hall) and Waterloo’s Public Square. My two youngest sons and I bicycled from one square to the other, and the boys enjoyed the thrill of the (mostly) open road.
There was a lot to do between, and at, the two end points. My favourite discovery, though, was the remote-controlled model boats cruising the water in Kitchener’s Civic Square, courtesy of  Golden Triangle Marine Modellers (no website, alas). One of the modellers, Paul, was kind enough to let both my boys pilot his tugboat for a while, and both did so without crashing into other boats or the concrete sides of the pool.
The next square2square event is Sunday, August 14, and we’re all looking forward to it at our house. Thanks, and congratulations, to the cities of Waterloo and Kitchener for organizing these events this summer.

It’s been too long between posts, and may stay that way for a while. Here’s one that marks the recent Canada Day holiday with pictures of our fireworks from July 1 (and its aftermath), posted on the day that our neighbours to the south celebrate their Independence Day. Enjoy. 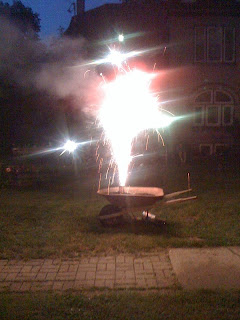 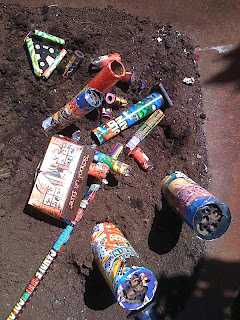