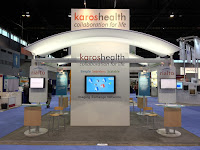 Last week I was in Chicago with my Karos Health colleagues for the 97th Scientific Assembly and Annual Meeting of the Radiological Society of North America. That’s a bit of a mouthful, and around Karos we just refer to it as RSNA. It’s an important annual event on our company calendar, as the Technical Exhibits portion of the assembly — essentially a trade show — provides an opportunity to meet with a vast number of healthcare hardware and software vendors.

We were at the event last year as well, but with a much more modest presence.

This year, we had our own booth, and many of the meetings that we had with partners and customers were held there. We had four demo stations, in contrast with our single station last year, and there were several occasions when we had multiple demonstrations going on. As with last year, we were quite proactive in arranging meetings ahead of time. In an encouraging development over last year, we saw more people who sought us out in our booth based on a recommendation or having a specific problem that they hoped one of our products could solve.

We introduced a new product at this year’s event and I was happy to be able to demonstrate it in its current early state. People were engaged, we got some good input and feedback, and the product looks like it meets a real need.

The event was a complete success for Karos. We could not have expected a better experience than we had. Now the work of following up on potential opportunities begins.
Posted at 8:00 AM