While traveling home from UX Camp Ottawa, Bob Barlow-Busch and I had a fun discussion about our airplane’s route as presented to us by the seat-back, enRoute system. The system cycles through multiple screens showing information about our trip in progress.

Here’s a photo of a route map, showing us flying west from Ottawa to Toronto. The airplane icon moves from right to left over the course of the trip. The map is presented at a variety of other scales as well. (As an aside, a segment of the route trace is missing at the start.) 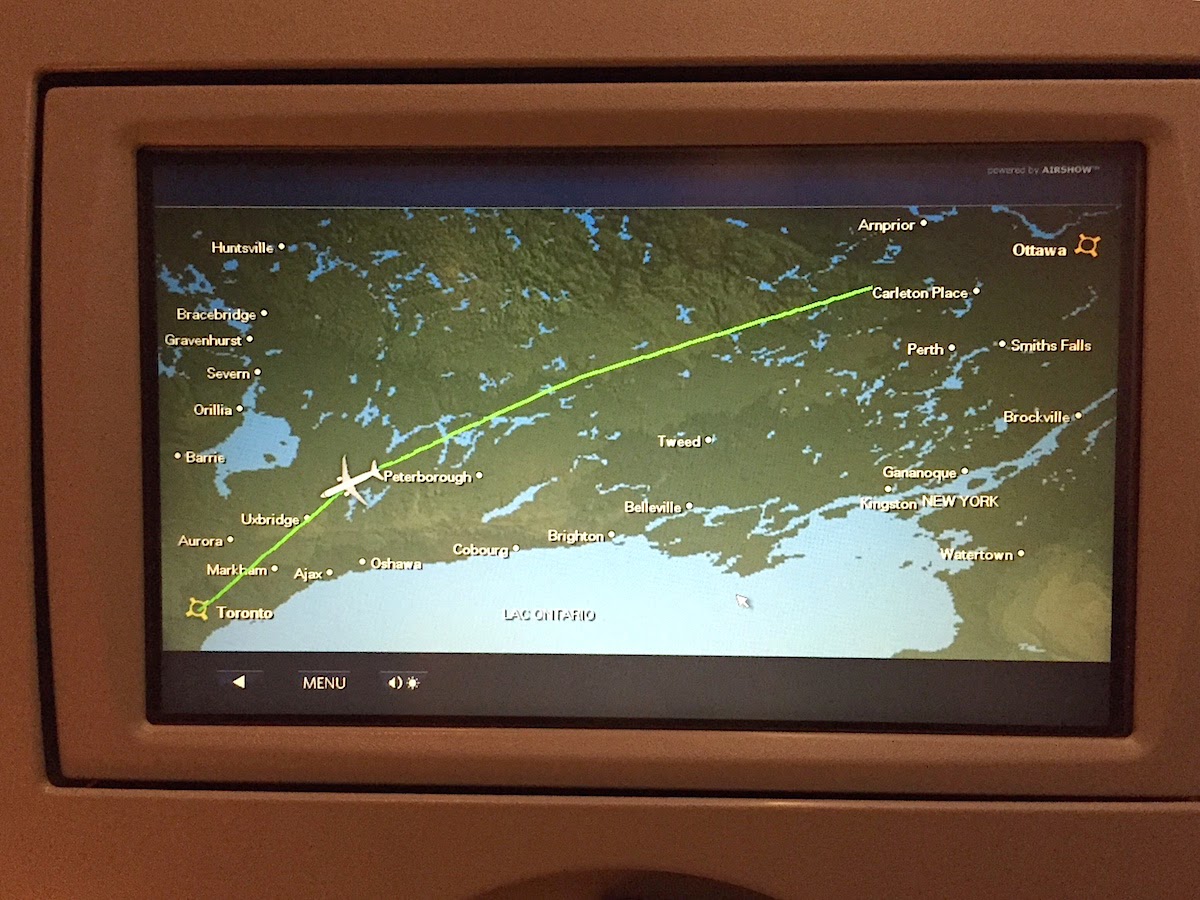 Here’s a photo of what looks like a simplified route map. The airplane icon moves from left to right over the course of the trip. That’s the opposite direction to what is shown in the earlier map. 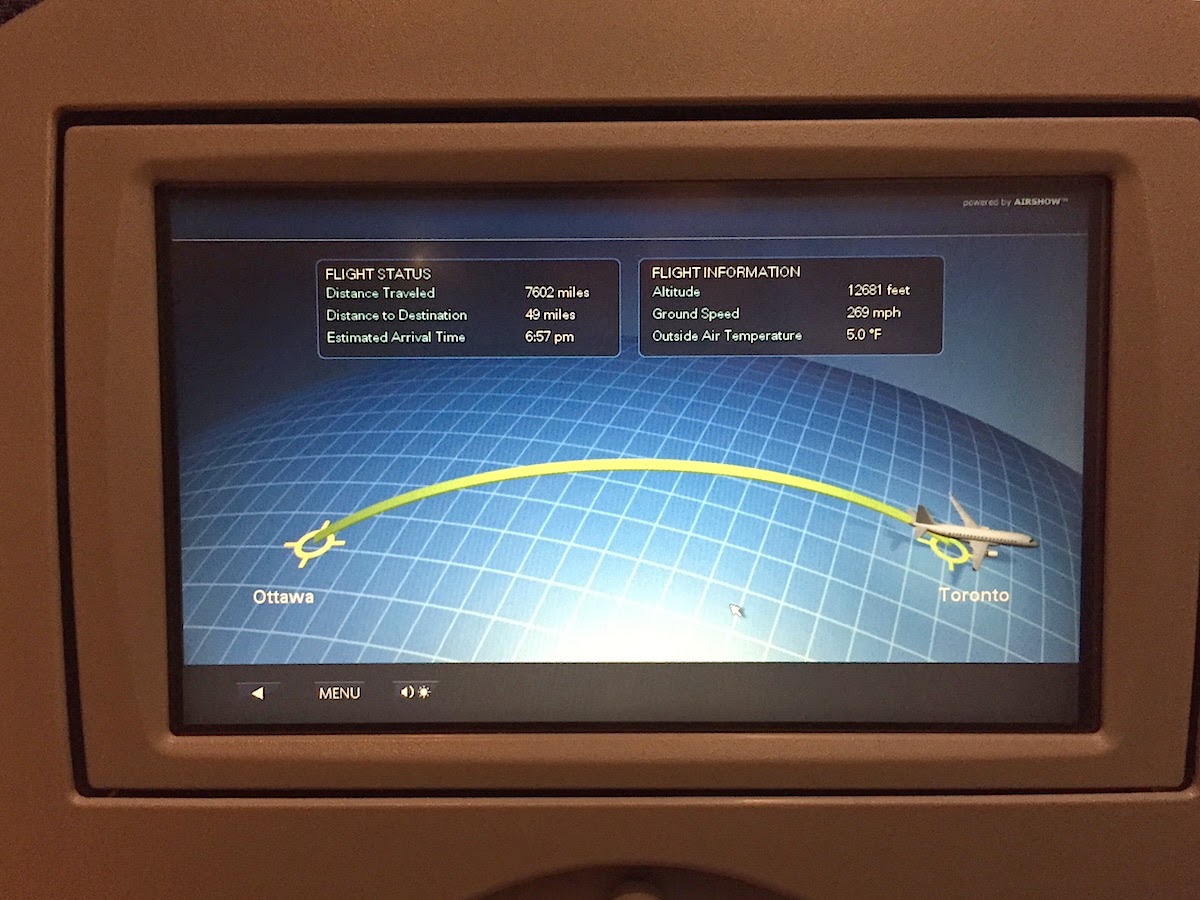 What’s going on is that the second map is really a progress indicator that has been “enhanced” through the addition of a curved grid and the use of a curved progress line. These enhancements seem to be meant to evoke a 3-dimensional route through the air. The problem is that when shown right after the previous map, the direction of travel is reversed for our particular trip. The system has a generalized approach to representing any given trip, and in the case of ours this conflicting presentation is the result.

A simple solution would be to create a progress indicator that is devoid of what Edward Tufte calls chartjunk. A clearer presentation would be unlikely to look like a flight trace.

As an aside, Bob and I were quite aware that we were flying through the air at high speed on a regularly scheduled flight, and that give that context this was a pretty minor issue for us!
Posted at 8:30 AM No comments: 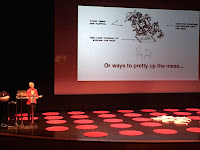 Having presented three editions of Fluxible, our UX conference, Bob Barlow-Busch and I know how much work goes into creating such an event. And while we love doing it, we’re always working while Fluxible is on, always paying attention to various details.

This past weekend Bob and I travelled to Ottawa to attend the fifth edition of UX Camp Ottawa, giving us an opportunity to enjoy a UX conference without needing to ensure that it’s running smoothly.

It was a fine experience, with a different vibe, and a larger crowd, than we’re used to with Fluxible. We enjoyed the program of speakers. We also had some great conversations and reconnected with old friends (Cornelius! Lou!) and made a few new ones (Abby! Kim!). We were delighted to see Konrad Sauer deliver a talk that he had debuted at Fluxible 2013. All this is what what conferences are for, right?

UX Ottawa co-chairs Cornelius Rachieru, Tanya Snook, Barbara Spanton and their team have created a great event. For Bob and I it’s gratifying to be a part of the larger UX community that UX Camp Ottawa and Fluxible are supporting here in Ontario.

One of the things I love about Boltmade is the way that we engage with the community and share our knowledge as well as our wonderful space in the Bauer complex.

Boltmade has been host for the venerable DevHouse monthly meetups for quite some time, and has recently hosted sessions for uxWaterloo (which I run with Bob Barlow-Busch), KW Ruby Developers, and People x Products, among others. All were enthusiastically attended.

Beyond playing host, though, we also develop our own workshops to give folks hands-on experience with various aspects of software product development. For example, last week two of our designers, Brian and Blake, presented an introduction to Sketch, a cool UI prototyping and design tool that we’ve been using and enjoying on our projects at Boltmade. Back in September Chris and Stephen presented an introduction to functional programming.

Beyond our cozy office, Shan will be taking her prototyping workshop on the road to present it at a REAP lunch session at Felt Lab.

Interested in meeting interesting people and learning something new? Check out our events and join us at a future session.
Posted at 8:00 AM No comments: