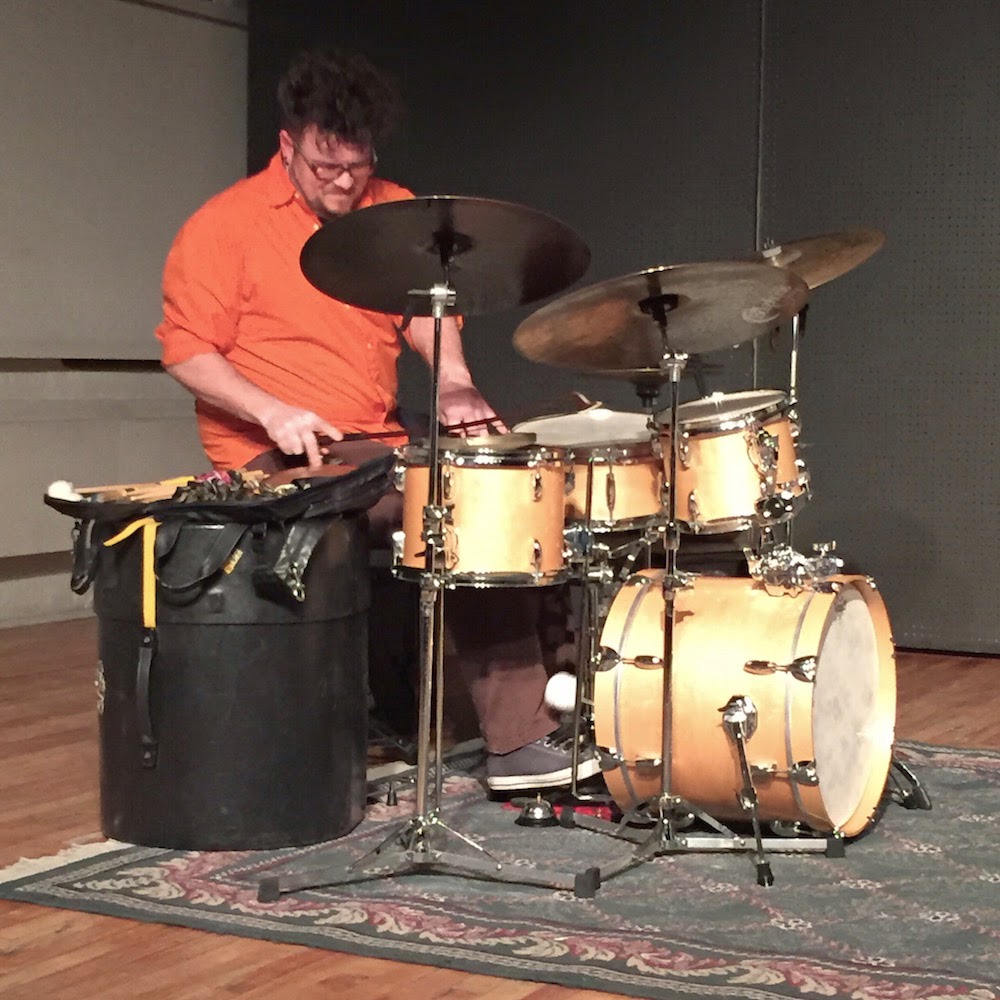 Last Friday I enjoyed an evening of craft beer and improvised music, a combination that’s perfect for me.

I started by meeting my friend David for a quick beer at Abe Erb, the brew pub that opened in Uptown Waterloo this past fall. I love the atmosphere, with its distinctive and local style that feels just right. I also love the selection of beers, with an emphasis on their own fine offerings but augmented with beers from other Ontario craft breweries. Lovely!

Next, David and I walked over to the Button Factory for a NUMUS concert featuring three terrific improvising musicians. The event was a part of their Mix Series, which focuses on “improvisational music and emerging artists”.

Kathryn Ladano, who has also performed at each edition of Fluxible, started the night off with a set of explorations on bass clarinet. Next was Alison Cameron performing on a variety of digital, analog, and acoustic instruments. Finally, Joe Sorbara gave us a grand musical tour around his drum kit. Each of the three musicians delivered mesmerizing individual performances before joining together for a group improvisation. The event finished off with all three answering questions from the audience and talking about their approaches to their music. It was a delightful concert, and I need to get out to more NUMUS events.
Posted at 8:00 AM No comments:

A visit to San Francisco for Interaction 15

Last week Bob Barlow-Busch and I travelled to San Francisco for Interaction 15, this year’s edition of the annual conference of the IxDA. I had previously attended the 2013 edition in Toronto.

The conference is large, with 800+ people attending from around the world. The main venue was the Yerba Buena Center for the Arts, a terrific facility right downtown.

The program was a multi-track mix of topics, presented as talks, workshops, and panel discussions. Bob and I were pleased to see that there were several Fluxible alumni on the program, delivering new talks or material that they had previously done at Fluxible.

There were a few definite highlights for me.

“So, You Want To Run a Design Agency…” was a panel discussion with Christina Wodtke, Jesse James Garrett, Maria Giudice, and Julie Stanford. They were insightful and shared much from their years of experience running agencies. The fact that they all took shots of bourbon when one of them said the word “process” was a hilarious bonus.

“Jumping to the End: Practical Design Fiction at Google Creative Lab & BERG” had Matt Jones sharing some of the work that he’s done at those companies, and featured several fun looking projects.

Elizabeth Goodman’s “Beyond Handwaving: The Role of Performance in Interaction Design” did a good job of making explicit many of the things that I do intuitively when presenting a design to stakeholders.

The absolute highlight on the program for me was “The Modern UX Organization”, in which Fluxible alumnus Leah Buley presented the results from a study that looked at how top-performing design organizations work. It was data-driven and filled with astute observations.

For me, though, the most value at a conference like this comes from the conversations with friends old and new. The IxDA community is a friendly one, and there was plenty of opportunity to engage and learn. Whether through networking events, studio tours, meals, or just hanging around, the conversations were a huge part of the experience.

Finally, it was a treat to enjoy warmer temperatures in San Francisco. When we left for home at the end of the conference it was 16ºC there, and when we arrived in Waterloo Region it was -20ºC. Yup, still winter.
Posted at 7:00 AM No comments: 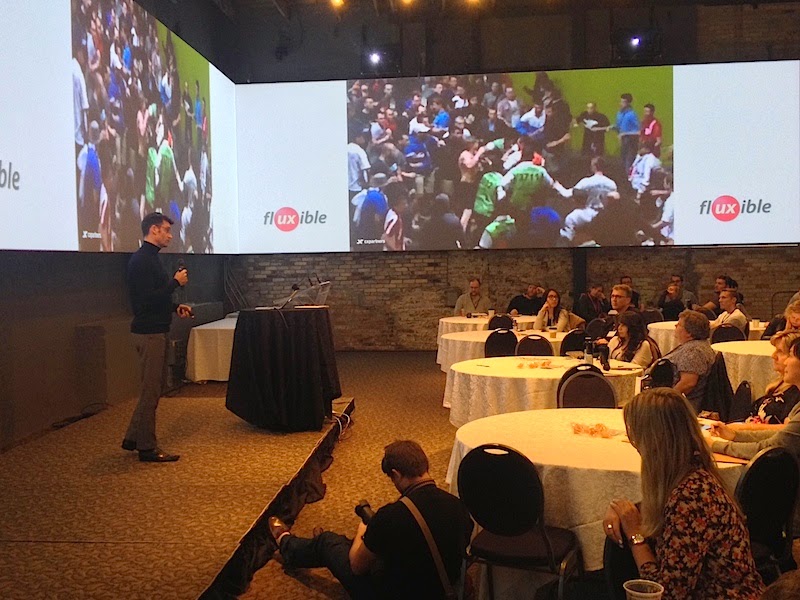 And, just like that, we’ve announced the dates for Fluxible 2015! Our next edition of the UX party disguised as a conference is happening on September 26 & 27, 2015. As we revealed over there:


Like last year, Fluxible will take place in the Communitech Hub and Tannery Event Centre, in the heart of downtown Kitchener. Some exciting events will happen during the preceding week as well, so stay tuned for details. Further announcements will begin shortly, and we hope you’ll be as excited as we are!

As usual, we have some delightful surprises in store, so stay tuned! And what better way to stay tuned than to join our mailing list? You’ll get all the best news before anyone else!
Posted at 8:30 AM No comments: