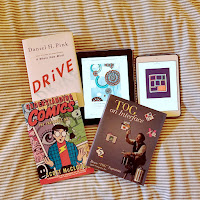 Following up on my earlier posts, here’s another set of books in an informal series on recommended UX reading.

As a reminder, the series isn’t meant to provide a definitive list, but rather a set of books that I’ve enjoyed and found helpful in my UX work. Some of them will be well known and already widely recommended. Others may be less so, though no less valuable to me. A few might even be eccentric choices for a list like this.

Understanding Comics: The Invisible Art
by Scott McCloud
I’ve been recommending this classic to designers for 20 years now! It’s a wonderful look at visual communication, exquisitely told using the form that it documents.

See What I Mean: How to Use Comics to Communicate Ideas
By Kevin Cheng
In the context of this list, here is a perfect companion to Understanding Comics, as Cheng makes explicit the UX contexts in which to effectively use comics.

Drive: The Surprising Truth About What Motivates Us
by Daniel H. Pink
While not explicitly a UX-related book, Pink’s book is nevertheless a relevant, and fascinating, read.

Interviewing Users: How to Uncover Compelling Insights
by Steve Portigal
Thoughtful, humane, practical, and more, Steve has created a great guide for a foundational aspect of UX research.

Tog on Interface
by Bruce Tognazzini
It’s almost a quarter-century old, but while a few of the examples are a little dated Tog’s writing remains vibrant and engaging, and the concepts are as relevant and important as ever.
Posted at 7:00 AM