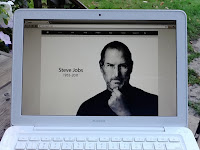 I’m surprisingly saddened by the passing of Apple’s Steve Jobs, a man I never met. I’m also feeling surprisingly reflective. I can’t think of any other company or person whose products have had such a profound impact on my daily life for such a long time.

The Mac wasn’t the first computer that I ever used, but my first Mac made a liberating, empowering, and lasting impression on me. I don’t think it’s any exaggeration to say that I would not be doing what I’m doing in my career as a designer without the Mac and later products from Apple.

I think that my best response today is to use my Mac to try to make the world a better place. I hope that I can have even a fraction of the impact that Jobs had.

It feels overwhelmingly fitting to finish off this short post by saying that I wrote it on my iPad.
Posted at 7:56 PM